The Voices That Need To Be Heard


"Kate Middleton wears Red Dress at Order of the Garter Service" is currently trending higher than "Vigils for Orlando Shooting".
This may give you a bit of an insight in to how much LGBTQ+ people think our lives matter to the world at large.
So too when Owen Jones, a gay man, is shouted down on Sky News by the presenters for making the point that the shooting at the Pulse gay nightclub in Orlando, Florida was a terrorist attack specifically on the LGBTQ+ community, not an attack on “all people”.
So too when the Daily Mail didn't think it was important enough to mention the attack on the Pulse Nightclub on its front page and when the New York Times doesn't think it is relevant to mention that the largest mass shooting in the US since Wounded Knee directly targeted a Latinx Night at a gay venue run by Trans* and Drag hosts.
Apparently there is no injury so heinous that insult cannot be also added to it. Erasure of the very fact that this is a hate crime directed at LGBTQ+ people is an erasure of their deaths, suffering and loss. Moreover it is an erasure of the lives they led at whichever level of "outness", open-ness and dignity they could navigate safely.

Amidst the outpourings of horror and sympathy and compassion, all of which are needed, think about the voices that are being heard. On most of the mainstream news outlets there have been countless debates where all the participants exist so far outside these communities as to be barely aware of the realities of their existences. Where are the Latinx voices, the Trans* voices, the voices of those who were wounded? Start there. Continue with the voices of the queer and trans* muslims. There are so many voices that need to be heard.
Amplify the voices of those who are most marginalised: 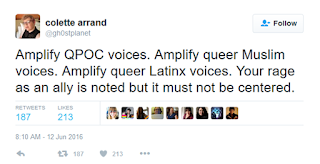 The voices we long to hear can no longer speak. They are the voices of those murdered by a man who was a product of an increasingly hostile culture where LGBTQ+ citizens have so little value that they are not legally protected from people firing them, evicting them, denying them healthcare and refusing to sell them anything they damn well choose including a fucking cake. Where Trans*, GenderQueer and gender non-conforming people are seen as too dangerous to share a public restroom with, instead of being the people more at risk of being victims of violence. Where a Presidential Candidate thinks there needs to be a wall to keep the Latinx people out.  Where a man with a history of domestic violence and on an FBI watchlist can still legally purchase a military assault rifle.

At times like this a traumatised and terrorised community needs allies. I am aware that I am an ally in many respects: I do not live in Orlando, I am British, cis-male, gay, white, druid and I am aware of those privileges I have. My intersectionality with the victims of this act of terrorism means I wept for the attack, I felt terror, it felt personal and close. But my voice should not drown out or create noise above which theirs cannot be heard.
I am not un-entitled to my grief, my fears, my opinions. I am privileged enough that I can set this tragedy aside and rest from it when I need to, not so privileged that I never have to worry about where I hold hands: 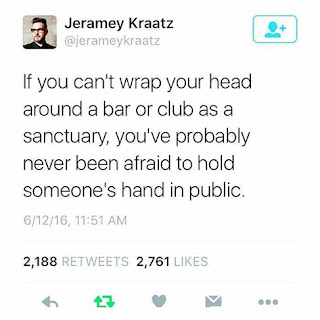 With that privilege comes the responsibility to listen, witness and share those voices.

“If healing is what we want, then we must give the marginalized voices targeted by this tragedy the space to articulate their suffering. This is what will emancipate them of their pain. This is what will empower others in communities who are suffering... Chances are, queer voices, Latinx voices, and Muslim voices are already saying what you wish to express, and you will likely find that they are expressing it in a more articulate way than you are able to. Make the choice to share those voices instead of centering yours.” – Mariella Mosthof
Posted by Ferdiad at 13:31 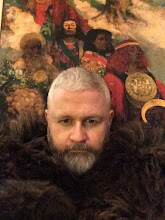